The 2022 Wessex Reunion was held on September 14th at the Huntsman Inn, Brockenhurst Hampshire.

A slightly diminished group due to advancing years and sickness, met together to share updated news and reminiscences

The dates of training of those present stretched from 1950 to 1980 which provided much interesting interaction of conversation.

Next year’s reunion will be again held at the Huntsman Inn, Brockenhurst on Wednesday September 13th 2023 from 12midday.

We would love to see you there

Prior to the first Wessex Reunion following the Covid Lockdown,  I approached the usual venue in Brockenhurst, the Huntsman Inn, to enquire about any restrictions that were still in place that might affect our day on September15th.

The front door was shut (at 12 midday) the entrance to the garden said ‘No Entry’. I didn’t think we had behaved that badly previously, however, I decided to try a small hotel nearby and in the Forest – The Cloud

The welcome was wonderful, every requirement was met and the prices were very reasonable. Eleven of us attended; sadly some of our friends were unable to make it due to anno Domini or poor health. However, the level of chatter was as entertaining as ever and the appreciation of the venue unrivalled.

It was unanimously agreed that we should keep the Cloud as our meeting place for next year, on Wednesday September 14th 2022.

Back row of the photo L to R:

It seems quite remarkable to me that 17 of our set were able to meet up at the London Bridge Hotel on 1st September 2021 to celebrate our 51st anniversary of starting at Guy’s.

Plans had been in place for our reunion in 2020 and there was a sense of anticipated excitement from those I managed to track down. Naturally, those plans were scuppered (like so many others) due to the pandemic but as the second wave came and went and some social freedoms were granted, we started to think that meeting up somewhere might be possible in 2021.

Sadly, Guy’s was unable to accommodate us as their hospitality spaces were taken up by everything to do with vaccination, so we opted to stay close by and have afternoon tea within walking distance which meant that we could take a wander around “our” Guy’s for memories sake. Our last reunion had been in 1991, so it’s fair to say that the sight of the quadrangle from St Thomas’s Street came as quite a surprise. The statue of Sir Thomas Guy had been removed and a vaccination centre filled the entire space. Walking through the colonnade revealed sad looking buildings to our left and right with building works blocking a through way. The ravages of time and the pandemic stared back.

With those images in mind, we arrived at the hotel and on meeting up, the mood instantly lifted to one of celebration. Covid safe measures were in place, we had done LFTs the day before and we sat at tables in a private room. Even so, I still felt nervous and responsible for taking the risks we had but thankfully, we all remained well and safe.

It was so worth it and I really can’t express just how happy the afternoon made me feel. It was wonderful to know that after 51 years, the bonds that we had created so long ago, simply spilled effortlessly out into the room.
Pandemic apart, we all had stories to tell which made us laugh and cry but what stood out for me
was the depth of care and compassion we all expressed for our friends, families, patients and the resilience we found to keep going, reaching out where we could. Remarkably about 80% of us had remained in nursing, with someone only recently retired. The diverse careers we had had bore testament to the talents, creativity and passion we had to communicate at every level and at the end of the afternoon, I was left with that that fuzzy warm feeling you get when things seem just right.

I cannot finish without recounting a story that was sent to me by someone who sadly could not attend. Newly qualified and working in Nuffield House Theatres, she scrubbed to assist Mr Frank Ellis operate on Roger Moore who in 1973 had just launched his career as 007 and “he really was gorgeous” she said. But joking apart another, on reflection, described nursing as “an honourable and respected profession.” I wonder whether we knew what that truly meant back in 1970? I suggest, now we do.

This year’s reunion was held, as usual, at the Huntsman Inn  in Brockenhurst, which is conveniently close to the station with trains running between Waterloo and Weymouth.  It was a beautiful sunny day and in true Guy’s nursing tradition the thirteen of us who attended had a great time. I had unforgivably omitted to set aside an area, suitable for this group of highly distinguished, members of the nursing fraternity.

Our next reunion will be held in the same place in Brockenhurst  in the New Forest. The date is Wednesday September 16th 2020 from 12 midday.

I hope that as many as possible of you, who are able, will come along and join us.  There is ample parking space and Brockenhurst is midway between Lyndhurst and Lymington on the A337. If you have any queries, please ring me at home on 02380282363 or on my mobile 07763345633.

23 of us met at the Assembly House in Norwich and had a lovely time.

It was interesting hearing reminiscences of Guy’s across the generations with people having trained from the 1940s to the 1980s, and we are hoping to collate people’s stories into a booklet.

It was agreed that everybody would like to return to the same venue next year, the date to be announced later this year.  All are welcome to join us.

23 of us (plus Robin's carer) met in Oxford at the end of March. Our training years ranged from 1940 to the 1970s. These annual reunions are great fun  and we all have similar stories to tell regardless of when we trained.

We would very much like to meet more younger Guy's nurses living in or around Oxford and the Thames Valley. See contact details on the reunion page - we plan to meet in the Spring each year, so do join us.

This year’s reunion was held at the newly refurbished Huntsman Hotel in Brockenhurst,  previously called the Rose and Crown. The staff had reserved a room away from the rest of the bar and provided very efficient waitress service.

Seventeen of us attended including some who trained in the 1940s right up to the 1990s. The wide coverage of experience always makes for interesting conversation, each group keen to hear  stories from another era.

As usual it was a completely informal occasion. Some husbands came with their wives and then went off to enjoy themselves elsewhere. We were all responsible for our own refreshment and the hotel provided a good menu with a wide selection of food and drinks. The weather was kind to us and allowed us to enjoy the gardens.

If you live within travelling distance of Brockenhurst, either by train or car, do come and join us next year on Wednesday13  Sept 2017.

The Huntsman is approximately 100 yards from the station and has ample parking space. We meet at 12 midday and leave when we have exhausted our chat.

Those present this year were ;-

We have to end on a sad note:

Shortly before this years re-union Gwen MacDonald, who was a regular attender at the Wessex re-union. had a fall and sustained a serious head injury from which she has sadly died

Marian Hubble and Dorothy Alderton were able to attend her funeral

Her presence at future re-unions will be much missed

On Wednesday September 16th the Wessex Group of Guy’s Nurses met at the Rose and Crown in Brockenhurst.

Thirteen of us attended which was slightly down on last year, due probably to the appalling weather.

However the rain and squalls did nothing to dampen the enjoyment of what was a completely informal occasion. We were all responsible for our own refreshment and the hotel provided a good selection of food and drinks from the bar.

If you live within travelling distance of Brockenhurst, either by train or car, do come and join us next year.

The reunion next year, on Wednesday September 14th will be held at the Rose and Crown, which is approximately 100 yards from the station and has ample parking space. We meet at 12 midday and leave when we have exhausted our chat.

The July 1955 set recently celebrated their 60th anniversary since beginning our training at Holmesdale. 14 of us met together in Shrewsbury for a wonderful 2 day get-together arranged by Mary Drinan,nee  Gilbert.  We stayed in the Prince Rupert hotel well placed in the centre of the city  and where were made very welcome, taking over the bar area and displaying photos and Guy’s memorabilia.! On Tuesday evening we were entertained by Mary’s granddaughter who is training at Kings College, London University and is currently “doing her placement” at Guys. She had made a little video and showed us around well-remembered- and- new buildings and explained some of her training and experiences and answered our many questions in a very professional manner.  The next day, Mary had arranged a Minibus to take us to Powys castle where we had a delicious lunch in a private room. We then dispersed around the beautiful grounds in glorious sunshine,(specially ordered for the day!) and finished with a wonderfully decorated cake made by Enid Woodward, nee Wilson. The day ended with more chat in the bar and us all signing cards to send to several members who had been unable to attend due to illness or other commitments. We had come from all corners of the country and one even came from Zambia!  What a wonderful feeling of “family” which we still feel towards our Alma Mater, Guys Hospital, fostered by the Nurses League. 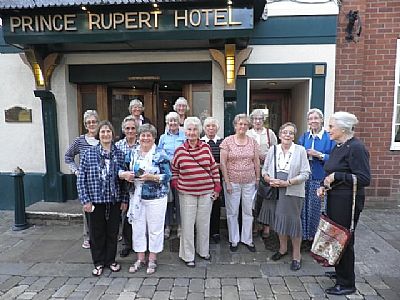 Margaret Evans-Jones and I had travelled up from Suffolk and one lady who came with her sister was from Nottingham but everyone else lived in Norfolk.

There were 3 ladies who had trained in the 1940s; Peggy Steib, Ruth Barrett and Pamela Miller and one man, Philip Clarke who held senior posts at Guy’s.

Thanks to Jane Ross and Joan Hellewell who organised the occasion and also to Anne Huggett and Liz Gaymer who have taken on the task of arranging next years.

This year’s reunion was held at the Rose and Crown in Brockenhurst  in the New Forest on Wednesday September 24th 2014.

This change of venue from the Cowherd in Southampton, where we had met previously, followed suggestions from some of those present at the time, that a change of venue might be appreciated by people travelling from the Dorset area.

The Rose and Crown proved to be very popular and sixteen Guy’s Nurses past and present with ages ranging between the twenties and the eighties enjoyed a warm welcome, good food and a beautiful day of sunshine, not to mention 3 – 4 hours solid chat!

The consensus of opinion at the end of the afternoon was that the Rose and Crown provided an excellent venue for the Wessex Reunion and that we should repeat the experience next year.