If you wish to have a set reunion at Guy's, catering and room hire are available. Please call 020 7188 7188 and ask for hospitality or email hospitality@gstt.nhs.uk

Next year’s reunion will be again held at the Huntsman Inn, Brockenhurst on Wednesday September 13th 2023 from 12midday.

We would love to see you there

MOIRA ANDERSON WILL NO LONGER BE RUNNING THE SOUTH WEST GROUP. If anyone else wishes to take it on please leave a messsage on the guestbook page. 10th Feb 2021

Lynne has sent me set photos - see below

It will be 50 years on May 2nd since we all started at Guy’s ! It would be fantastic to have a set reunion. Its a long long time since we all met up at The Anchor . I only have contact details for 5 others who are very keen for a reunion ; so if anyone from our set sees this and wants to meet up for a reunion then do please let me know and also please tell anyone else you’re in contact with .

Depending on interest and numbers we could then hopefully arrange something at Guy’s .

I look forward to hearing from you

We are celebrating 50 years since we started our training on Tuesday 1st September 2020.  The event will be held at Guy’s Hospital from 12 - 4pm.

We are celebrating 50 years to the day since we started our training on Friday 13th September 2019.  The event will be held at Guy’s Hospital.

This year we are celebrating 25 years of Re-Unions held in Cambridge on Thursday 11th April 2019.

Our next reunion will be held in in Brockenhurst  in the New Forest.

I hope that as many as possible of you, who are able, will come along.

The Huntsman is very convenient for trains on the Waterloo to Weymouth/Bournemouth line and is situated 3 minutes from the station. There is ample parking space and Brockenhurst is midway between Lyndhurst and Lymington on the A337. If you have any queries, please ring me at home on 02380282363 or on my mobile 07763345633.

SEPTEMBER '68 SET RE-UNION on 14th September 2018 in London. Celebratory meal 50 years to the day after you started your training. For further details contact Sheila Clegg, nee Ambrose, on mummyclegg@googlemail.com

If you require further information please email sarah@nwpenn.net or telephone 01223 842899

The Rose and Crown is approximately 100 yards from the station and has ample parking space. We meet at 12 midday and leave when we have exhausted our chat!

From 2020 we will not be holding Oxford based reunions. Unfortunately the lack of younger League members has meant no one coming along to take over the organisation!
As an administrator for this website I am able to add relevant information such as obituaries or possible future local reunion group activity for the Oxford area.

Our Scottish group met for lunch today. I have to tell you that they are a
very keen and active group. We have about 6 regulars from the 50s, rather
more from the 60s and one delightful 92 year -old who was at Guys during the
war plus some more immobile members who still want to keep in touch - which
was why we reccomended that they look at the website. several are married to
Guys docs and keep up with reunions etc.

We were all rather disappointed at the lack of contributions to the League
website and have got carried away to contribute. We have appointed Margaret
Hobbs who actually teaches IT as our website contributor and started sharing
ideas about what to do. We know about the active groups like London,
Cambridge and Norfolk but I think the group want to show that we are here
and make links with other groups

One thing which was suggested and eagerly taken up was organising a lunch
like the one at the house of Lords next year  - esp. as next year is the
Empire Games in Glasgow, the Open and one otr two other things. Do you think
people would come north for something like this?Most probably to Edinburgh.

We thought we should check with you before we sent our first offering to the
website and ask for some advice about inviting people to Edinburgh. This why
I am contacting you rather than than Andie - but have copied to her 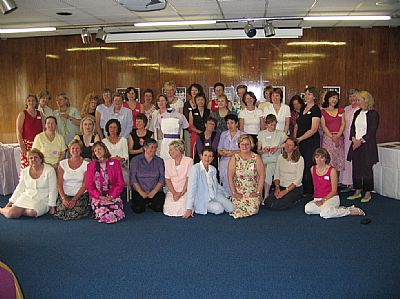 At midday on October 10th 2012 , thirty seven members of the October 1962 set met in the Robens Suite at Guy's to celebrate the 50th anniversary of the day we started at Holmesdale on October 10th 1962.

We had a wonderful afternoon together, enjoying a nice lunch, lots of chat, a visit to the Gordon museum or a tour of the hospital followed by afternoon tea, before we all said our farewells and departed.

People had come from Canada, Bermuda, USA, Scotland, Wales, Spain, Cornwall, Northumberland and throughout the counties of England.

During the year I had collated biographies and up to date photos along with original photos taken at PTS and distributed the completed document to everyone so that we didn't feel like strangers on the day. E mail was wonderful for keeping in touch and everyone was very enthusiastic throughout.

The friendships we made all those years ago were very special and have stood the test of time and the reunion was an opportunity to celebrate this.

On 2nd July,  27 members of the January ' 71 set held their 40 year
reunion. This was an impressive total to gather together with friends
gathering from all over the UK and Ireland, to say nothing of Bermuda,
Texas, Australia and Switzerland. According to our ace organiser Mary
Davies ( nee Cripps ), 80 started in the set, 60 qualified and so we
achieved almost half; several people were unable to attend because
they were on holiday.
We ate a wonderful commerative cake ( photo sent separately ) and had
lots of other photos. The decibel levels were amazing; a good thing
that we met at lunchtime !!
We are all very much looking forward to our 45 year reunion in five
years time, when we hope that several more of our original set will be
able to come along.

Several local re-unions have already been established, including Cambridge, Norfolk, Wessex, the West Country and Thames Valley. These enable members to get together locally without having to travel long distances.

Normally they are lunchtime events with good food, lots of chat, reminiscing and sometimes a speaker.

If you are interested in forming a new local group please email me the details on GHNL10@btinternet.com and I will add it to the webpage

Contact Celia Manson on  01732 455603 or email celia.mansonede@btinternet.com    for more details

Weds September 26TH 2012 at 12MD at the Cowherds Public House, The Avenue Southampton. No need to book - just turn up for lunch and lots of chat!

The London regional meeting this year is the House of Lords dinner which is now sold out. Watch this space in 2013 for news of next years re-union